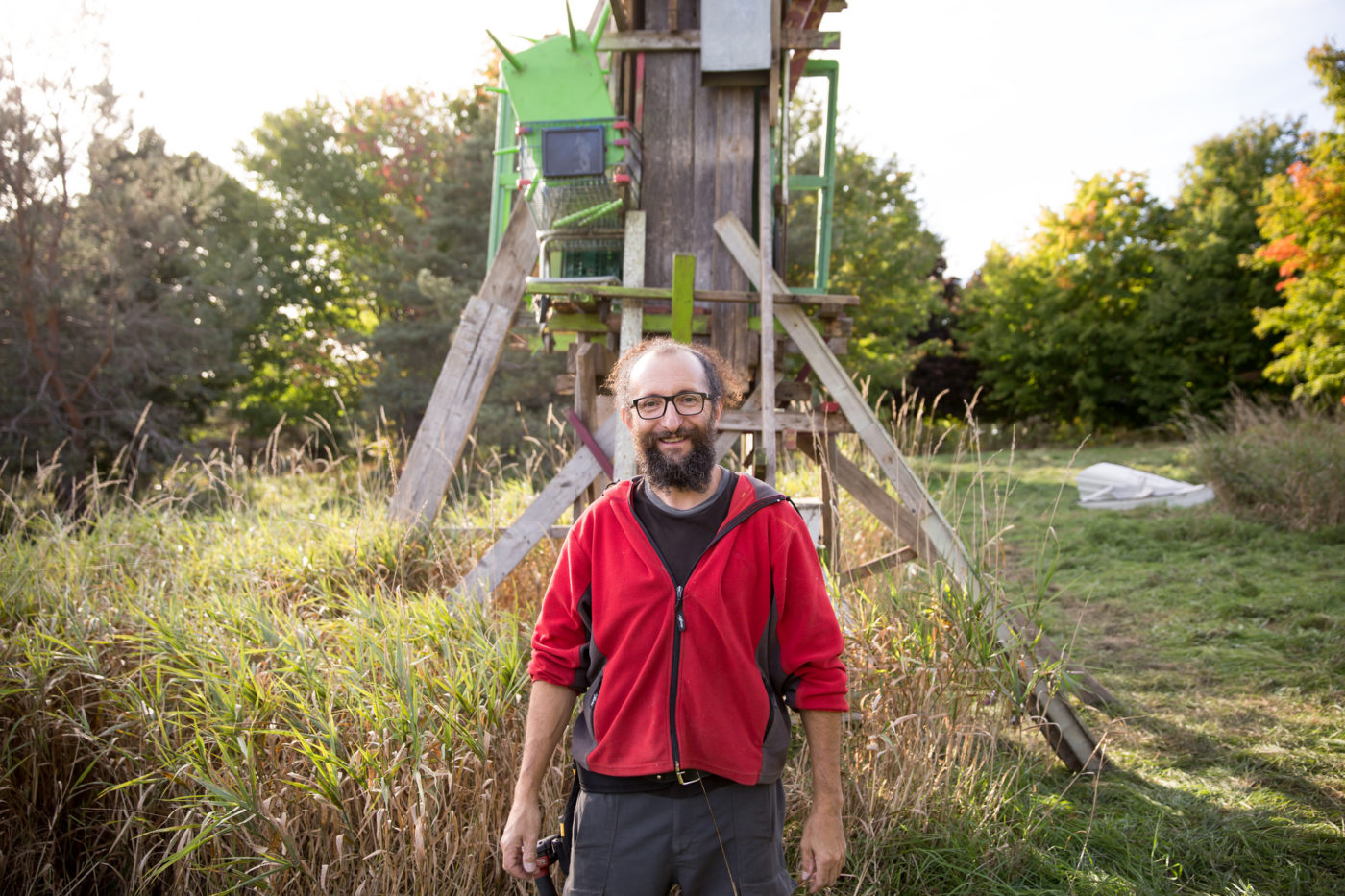 As I wander through the Ecological Park, I come across an impressive structure, towering tall, and rivaling the landmarks of the city’s skyline in the distance.  From this vantage point in the park, the cathedral in the distance is actually dwarfed by this seemingly precarious tower of found objects, drilled together in what appears to be a haphazard fashion.

A constructed assembly of lattices, planks of wood, palettes, chairs, and a shopping cart, José Luis Torres builds as he climbs and climbs as he builds.  Working without a plan, his composition takes shape in situ as a form of improvisational sculpture or architecture, not unlike the improvisation of a jazz musician.  What appears chaotic, and perhaps even anarchistic or dangerous at first glance, is actually quite structurally sound and solid.  It draws attention to the disconnect between appearance and actuality and our propensity to view organization and regularity as acceptable and safe.  Our preconceptions and biases are challenged as we watch José climbing and building level after level of this work.

For each of his projects, he works in situ.  Each of his works are site specific and unique to the place he is working in. He arrives in a community and allows himself to be transported by the space and then works to build a dialogue with that space.

He suggests that this may be a part of his immigrant identity.  Every time he arrives in a new place, he builds. Building is always an integral part of the immigrant experience.  Building relationships, building a home, building a network, building a reputation, building never ceases.   Not only sculpturally and architecturally, but socially as well.  He builds relationships and he builds spaces. Just as an immigrant arriving in a new country must work to make new connections, so Torres works to make connections with the places he works, and between the objects he finds in these places.

It is a primitive gesture.  There is an urgency to build something.  There is a drive to build with what he finds around himself. This act of building urgently from found materials calls to mind the survivalist skills required to build shelters in the wild, or in the aftermath of wars.

He explains that it is very interesting and very stimulating, to expose oneself to what is in our surroundings, and to build a vernacular with what one finds, here in the surroundings. In that sense, a newcomer is often more sensitive and aware to sights and objects that citizens might have become blind to in their daily lives.  For a visitor or a newcomer, the mundane is often just as new and full of possibility as anything else.  Through working with these objects, new life and interest can be breathed into them.

He finds it interesting to see what people throw away, what they neglect, and what they consume.  So the structure that he built in the end, speaks to us of what we build, what we consume, and what we throw away.  It speaks to our identity and to our culture.

The structure is at once of the environment and foreign to it.  He describes his approach like planting an artwork that could potentially last for years if left standing on its own.

He leaves this work as a trace of his explorations as he now returns to Montmagny. He leaves this sculptural structure for the community, and it is in the community’s hands to decide the fate of the work.   Will it be left to degrade in nature, will it be pilfered for parts, or will its presence here be momentary and brief, merely passing through before it is dismantled and taken down?   Only time will tell.